The most obvious AFC contender for 2017 are the Super Bowl champion New England Patriots. What the Pats have going for them is arguably the greatest coach in NFL history, a weak division (as usual), and the return of a surprisingly stout defense. A question mark will be how well Tom Brady plays at age 40. Last year I predicted he would fall off the cliff and stink it up, and boy was I wrong. But I bet I’m only a year off and that old-man time finally catches up to the legendary Brady. That being said, they played really well without him last year, so they could win the AFC without him. With a weak AFC East, expect the Pats to win not only the division, but earn the top seed yet again.

The teams that could challenge the Pats include the Pittsburgh Steelers, Oakland Raiders, Kansas City Chiefs, and Denver Broncos. The Steelers have made some good off-season moves, but still have questions on defense. The Raiders have talent on both sides of the ball, especially the emergence of franchise QB Derek Carr (oh no, not the Carr!), but have an overrated, average at best head coach who has no chance mentally against Bill Billichick. The Raiders better hope they don’t face the Pats in the post season. My prediction is the Raiders will miss the playoffs because of the brutal AFC West. The Chiefs have a good coach, solid talent, and the ultimate game manager QB in Alex Smith – which means they have an average QB with a high hurdle to somehow win in the playoffs and get to the Super Bowl. The Broncos by all appearances are going to be super stout again on defense, with the 2nd best player in the NFL according to his piers in Von Miller. They have also improved in the running game (esp. if Jamal Charles stays healthy) and were already solid at wide receiver. The obvious big question marks are the new head coach, and how well Trevor Siemian plays at QB.

AFC – On the Bubble 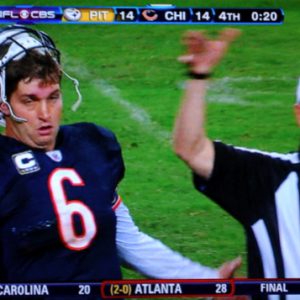 You can never count the Baltimore Ravens out because of their solid coaching and front office. But Joe Flacco remains at best a slightly above average QB who is unlikely to ever go on a run as he did in 2013. The Miami Dolphins have lots of talent on the roster and a bright young head coach in Adam Gase. But then there’s Jeff George, er, Jay Cutler at QB that likely spells another 2nd place finish in the AFC East and a recliner for the playoffs.  The Houston Texans will still bring tough defense and some good skill position talent (esp. DeAndre Hopkins), but the obvious question is what they’ll get at that oh so important QB slot with Tom Savage. The Indianapolis Colts still have way too many holes in their roster, and a QB in Andrew Luck who appears to have peaked, one of those good but not great QBs. The Cincinnati Bengals could make waves, but after last year’s lackluster performance there’s nothing in the tea leaves to indicate they can rise to the next level.  Maybe the Tennessee Titans are ready for a breakout, or maybe they were lucky to win 9 games last year. I think its the later. Finally, the Los Angeles Chargers cannot be counted out because of Phillip Rivers and some decent talent spattered about on the roster, but they yet again have to deal with a spate of injuries.

And so without further ado, I’m taking the safer road this year. In a wide open AFC, the most likely team with the easiest path is…