The Atlanta Falcons clearly have the best offensive talent in the NFC. Barring a letdown after an abysmal 2nd half collapse in the Super Bowl, the Falcons should be back in the Super Bowl hunt.

The Green Bay Packers have the best player in the NFL at the most important position in Aaron Rodgers. Whenever you have the best QB, you are a contender. Big question marks include their porous pass defense, we’ll see if their high draft picks in this area help.

Will the Seattle Seahawks offensive line continue to the most offensive stench in the NFL? If so it could spell no playoffs for them. Or will their stout defense and skill position talent on offensive be enough to make another Super Bowl run?

The Dallas Cowboys have arguably the best offensive line in football, and a decent defense. They also have the most overrated player in the NFL in quarterback Dak Prescott. Now before Cowboys fans throw a gasket, the reason for this comment is his being voted 14th best player in the NFL. Consider this. If Phillip Rivers, ranked 46th by the players, were the Cowboys QB, without a doubt they would be the Super Bowl favorite. Dak Prescott may well turn in to a franchise QB, but one season is not near enough to know. He played great as a rookie and good overall as an NFL QB.  How would Dak have fared behind the Seahawks, Broncos, or Bengals disastrous O-lines?

The New York Giants are the last of the contenders, barely off being on the bubble. The reason is a good defense, a good (but not hall of fame) QB, and supposedly more to bring on offense. The problem is their division, the 2nd toughest in football (the AFC West is easily the toughest). They could be staring at wild card again. But don’t ever count out the clover leaf team of the NFL.

Two years removed from being by far the best team in the NFC is the Carolina Panthers. We’ll see if Cam can turn it around. Last year’s debacle had little to do with the departure of yes, overrated Josh Norman.

NFC – On the Bubble

The Tampa Bay Buccaneers could surprise but it all depends on how well their young quarter back Jameis Winston plays. Outside of a weak offensive line, they have obvious big talent at the skill positions on offense, especially Mike Evans who may be the best wideout in the league. They filled a big hole in their secondary by adding free agent prize TJ Ward. They also get two byes to start the season (postponed game due to Hurricane Irma, Chicago Bears).

The Philadelphia Eagles have a promising young quarterback in Carson Wentz, and one heck of a good O-line. But their defense is just a tad above average, which puts the Eagles on the bubble.

The Washington Redskins and Kirk Cousins are oh-so-barely on the bubble to contend. Their biggest  problem is a tough division, they’ll be lucky to finish third and outside shot at a wildcard spot. 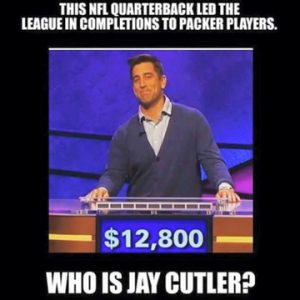 NFC – Worst in the NFL

My prediction is that the Chicago bears will supplant Cleveland as the worst team in the NFL. They just look awful. The one thing going for their future is they finally shed themselves of Jeff George clone Jay Cutler.

This matchup is so close it comes down to who plays at home. Based on their divisions, I give a slight nod to Green Bay hosting the NFC Championship. Their defense should be improved from last year if they can avoid the injury bug that’s plagued them, especially at the corners. Given this, here’s your 2017 NFC Champion and predicted Super Bowl Champion: