Through Super Bowl 50, the majority of Super Bowl winners deserved to win and were the better team. But every now and then a team wins because they flat got lucky. Anyone who denies that luck plays a role in sports is denying reality. There is some truth to the statement that “teams create their our own luck”, but let’s use common sense. Did the Giants create their own luck when New England’s Wes Welker dropped a sure pass that likely cost the Pats the game? The criteria I use for a team winning a Super Bowl by “luck” is based on how they got there, the expected outcome of the game (i.e. point spread), and what actually transpired in the game. I also take into account a team’s overall historical fortuitousness with the Super Bowl.

All things considered there have been actually very few “lucky” Super Bowl winners, hence why this is a top 5 instead of top 10 list.

This was a close call, with the Super Bowl 3 Jets and the Super Bowl 5 Colts in contention, but I ultimately landed on the Redskins and their lucky season of 1987 which culminated in a win in Super Bowl 22. The Super Bowl itself was a blowout over the 3-point favorite Broncos, but despite the 42-10 win, the game could have easily gone the other way if not for a blown officials call that would have given Denver a 17 point lead (a Doug Williams fumble was scooped up for a TD, only to be called back because Williams was “in the grasp” despite not a single Bronco touching him at the time he went down).

Also unlucky for the Broncos was the loss of left tackle Dave Studdard midway through the 2nd quarter that essentially shutdown Denver’s offense. Without those two events the game could easily have gone the other way. But what really gets Washington the clover leaf and on this list is how they got there. The 1987 season was a strike-shortened season with 3 games determined by replacement players in which the Redskins (to their credit) won all three. They then needed an improbable win in the first round of the playoffs over a favored Chicago Bears team at Soldier field, relying on a 52 yard punt return for a TD by Darrell Green. They make the list by winning with a good but not great team, led by a pedestrian QB against a good but not great Denver team. The tea-leaves fell just right for the Skins in ’87.

This was a super close call between the Steelers and the Pats, but the four Steelers world championships in the 70s, where they were truly the best team, separates them from the Pats in the luck column. What gets them on this list are the fortuitous wins in 2006 and 2009 (Super Bowl 40 and Super Bowl 43) which were won with huge amounts of rabbit feet and cover leafs. The 2006 win over the Seahawks is the only Super Bowl on record where a majority of fans, in fact a vast majority, believe the game was determined by the refs, not the winning team. Its also the only Super Bowl where the losing team led in every single major statistical category, even including more turnovers forced. This was also the year that the Steelers had to win 3 AFC playoff games on the road, including a win over Cincy that likely doesn’t happen if it not for Carson Palmer going down early with a knee injury. 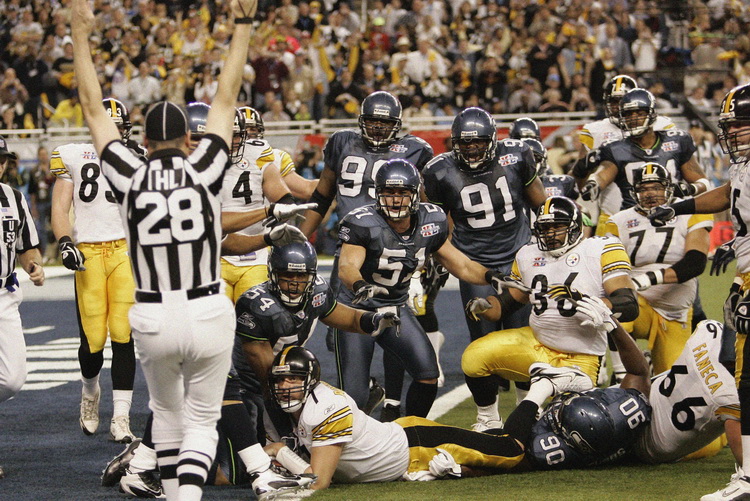 The Steelers win in Super Bowl 43 against the Cardinals only happens because of one lucky play that resulted in a 10 to 14 point swing, namely James Harrison’s 100 yard return for an ever-so-barely touchdown to end the first half. The Steelers end up winning in the last seconds in what is regarded by many as the best Super Bowl ever played. To be fair its 90% the Super Bowl 40 win over Seattle that gets the Steelers the #4 spot on this list. The 2009 team deserved the win, albeit with some serious luck against a Cardinals team that just as much deserved the win in a classic, hard-fought game.

New England would be even higher on this list but are saved by the fact that they also have two Super Bowls lost by bad luck (see the #1 team on this list). New England’s list of lucky wins starts with the Super Bowl 36 “win” over the St Louis Rams. I say “win” loosely because this was easily the most undeserved Super Bowl win in NFL history. There were two infamous things that happened this year. The first was the tuck-rule game that awarded the Pats an undeserved win over the Raiders in the AFC championship game (some could reasonably argue this was payback for the 1976 AFC playoff game when the Pats were robbed of a win over the Raiders due to a bad roughing the passer call). But New England saved the best for last by instigating the New England “cheat” era by stealing a win from the Rams, who were a whopping 14 pt favorite in the game. The 9-7 Pats probably lose that game 9 out of 10 times, but they were able to tilt their odds to 50-50 by stealing the Rams play calls before the game. 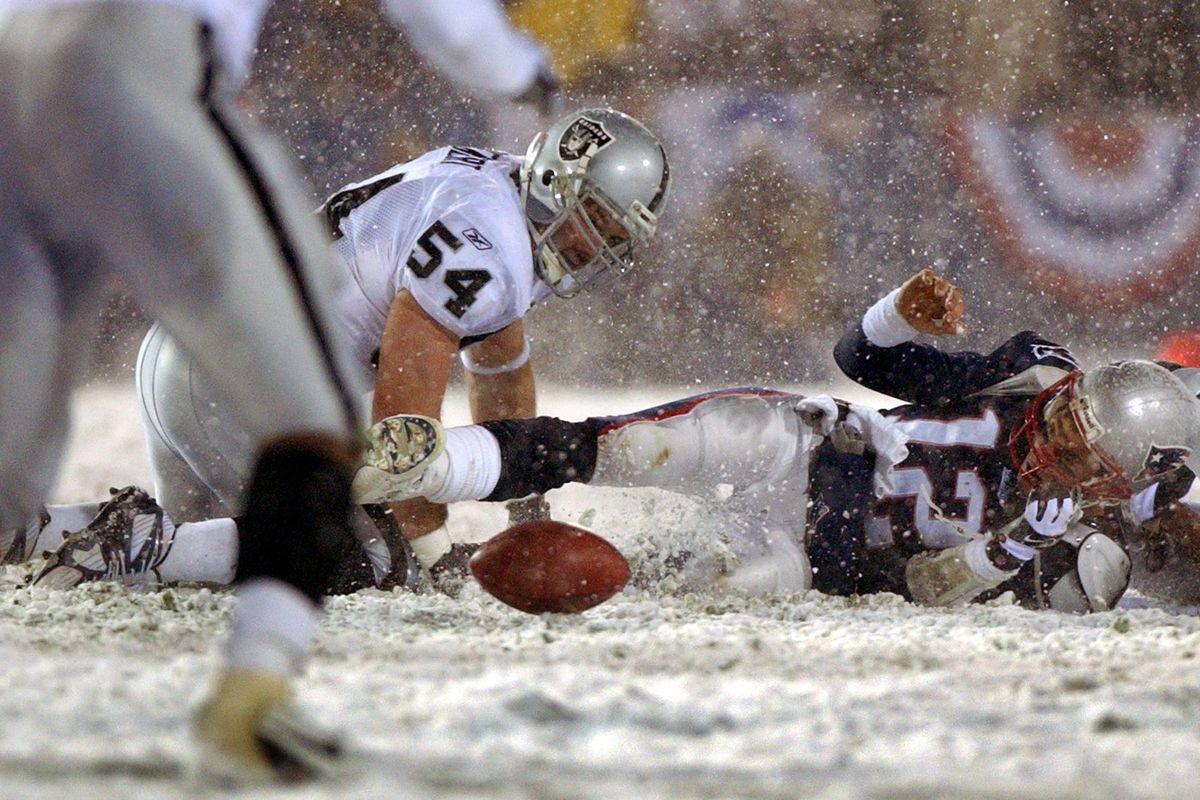 The Pats other lucky Super Bowl takeaway came in their Super Bowl 49 win over the Seahawks on the game-saving interception that many claim to be the worst play call ever (I don’t make that claim). But the Pats were lucky to draw the Seahawks in the first place, as I would argue that the Packers would have been a tougher matchup for them. The Packers had the NFC title game all but won against the Seahawks after they intercepted Russ Wilson for the 4th time with just over 5 minutes left in the game and a 19-7 lead. I told my son at the time that I predicted Vegas has the odds of a Seahawk comeback at 800 to 1. I was wrong, as I later found out it was 1000 to 1. So if you had bet 10 bucks on Seattle at that point in the game, you would have taken away 10 grand, but I digress. 🙂

The other two Patriot wins were in very close games of evenly-matched teams that came down to the wire. The bottom line is that the Pats had a lot of good fortune go their way when it comes to having 4 Super Bowl championships. 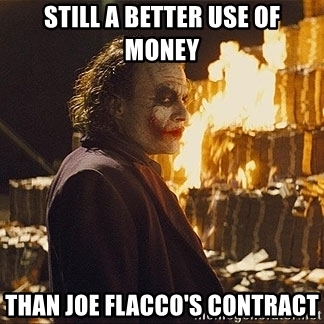 The Ravens earn the 2nd luckiest moniker because of their Super Bowl 47 win over the 49ers. A reasonable argument could be made that this was the worst team to ever win the Super Bowl, mostly only rivaled by the Super Bowl 42 and 46 Giants. People forget that Joe Flacco was heavily rumored to be on his way out of Baltimore due to a lackluster season, only to have a super lucky run in the playoffs that earned him a lottery win via a super-overpaid contract by the Ravens.

The Ravens defense was led by an over-the-hill Ray Lewis and Ed Reed, which made for an overrated defense. What really sticks out though was the super lucky Hail Mary win over the heavily favored top seed Broncos in the divisional playoff round. Without that lucky win over a Denver team wrought with mindbogglingly bad coaching decisions and a big time gaffe by Denver’s Hakeem Moore, Flacco might be playing somewhere else and New England would be 2nd on this list.

The 2000 Ravens are not a big consideration for this list as they earned their way to a Super Bowl win as a playoff wildcard team. However it should be noted that while they did have a great defense, they simply did not play stiff offensive competition. The year 2000 was a low point in NFL history for QB play. It was quite the paltry list, which included all-time classic 1st round busts Ryan Leaf, Tim Couch,  David Carr, and Akili Smith. Then you had your regular vagabonds such as Jon Kitna,  Cade McNown, Stoney Case, Elvis Grbac, Jay Fielder, Jeff Blake, etc. Only Hall of Famer Brett Favre was in his prime, with possible future Hall of Famer Kurt Warner the next best, both of whom played in the NFC conference. Peyton Manning was entering his 3rd year and just starting to come into his own. Its why I put the 2000 Ravens a notch below the 2015 Denver Broncos defense that had to bust through Ben Roethlisberger, Tom Brady, and Cam Newton to win their Super Bowl.

A runaway winner of this list is without a doubt the New York Giants, with 3 downright lucky wins out of 4 appearances. Their only win where they were favored and actually the better team was in Super Bowl 21 against the Broncos to cap the 1986 season. But even then they had luck fall their way on big plays. For starters, Denver failed to score after 1st and goal from the 1 yard line that results in Rich Karlis’ 2nd missed chip-shot field goal.  Despite this Denver actually led in that game halfway through the 3rd period until the Giants turned the momentum on a successful faked punt that led to the wild tipped touchdown catch by Phil McConkey.

But what about the other three wins? Everyone knows the famous Super Bowl 42 win over the 18-0 Patriots that required a miraculous once-in-a-lifetime catch by David Tyree for the 12 point underdogs. What many have likely forgotten was the luck to even get to the Super Bowl by having to win 3 games on the road as the last playoff seed as the perpetual underdog.

Five years later they played the Patriots again in Super Bowl 46, this time the Giants fortuitous play was Wes Welker dropping an easy pass that would have sealed the win for the Patriots. What many probably forgot about this season was that the Giants were lucky to just make the playoffs, let alone climb their way to the Super Bowl. They finished the season with a 9-7 record and only made the playoffs as the division winner because the NFC East was weak that year.

The 3rd fortuitous Super Bowl win was their 1 point victory over Buffalo after Ray Finkle, der, I mean Scott Norwood, missed a 47 yard field goal in the closing seconds of the game. This game doesn’t come close on the luck scale to the afore mentioned Super Bowls, because the Giants actually were a Super Bowl quality team that year with a defense led by Lawrence Taylor, arguably the greatest defender of all time. But the Bills were a better team overall coming in as a 7 point favorite, and probably win that game 3 out of 4 times. The Giants were lucky, that’s all. 🙂